The Endocannabinoid System Explained: How It Works And Why You Should Care

If you’ve done any research on cannabis science, you’ll have come across the phrase “endocannabinoid system” before. Understanding how this complex body system works is indeed key to getting why cannabinoids affect us the way that they do.

Here’s a brief overview of how the human endocannabinoid system works:

The endocannabinoid system (ECS) is a body-wide system that regulates important body functions such as pain management, appetite, and stress response (we’ll get more into the specifics in the second part of this article.)

This system is made up of a vast network of receptors called CB1 and CB2 receptors, which are found all over the human brain and body. When either endocannabinoids or phytocannabinoids bind with these receptors, it affects the function of the ECS.

When the ECS works like it’s supposed to, it keeps the body in a state known as “homeostasis”. When there are any unbalances in the system, various symptoms show up. This is why cannabinoids can be so instrumental in maintaining a sense of wellness. 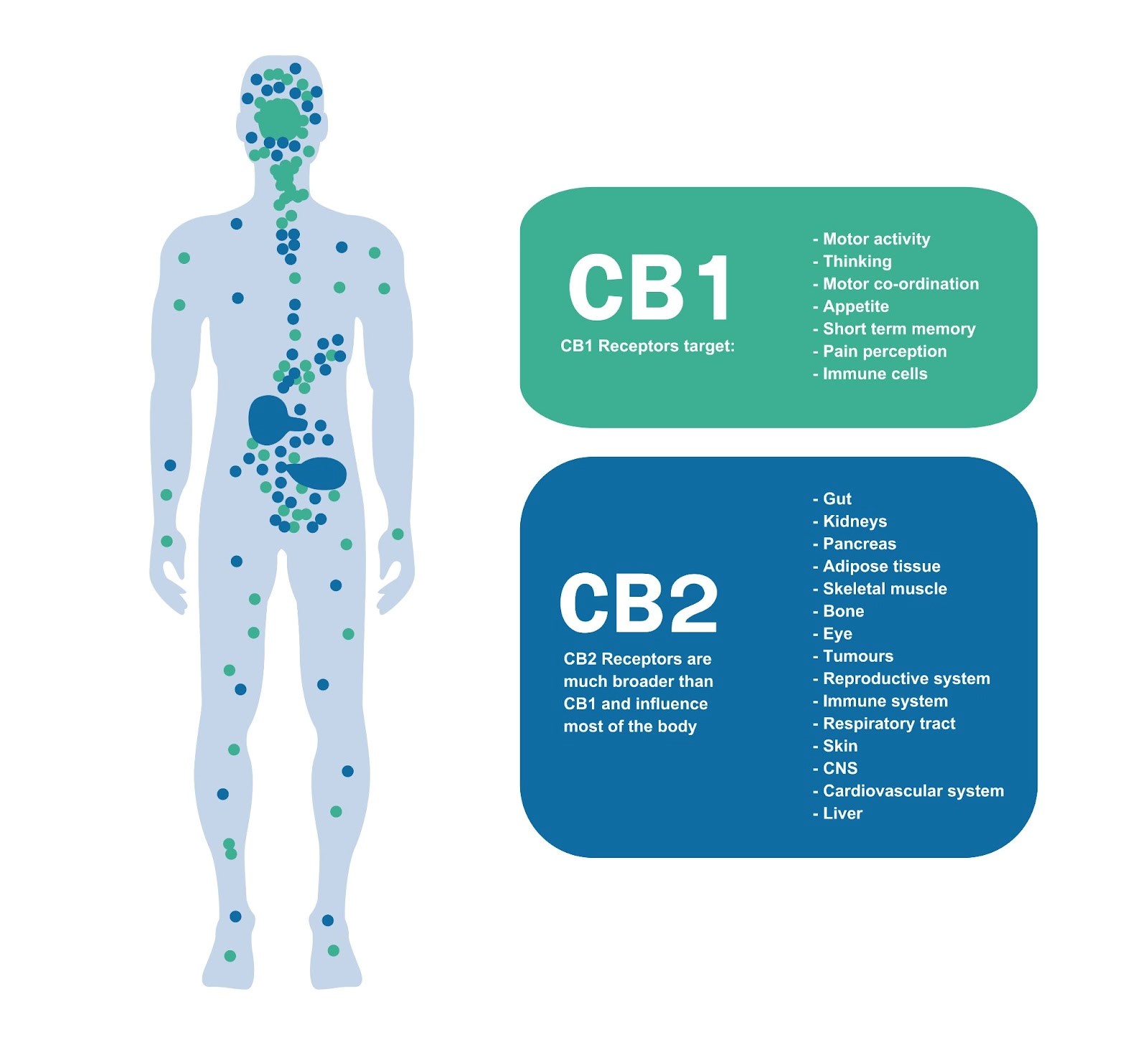 What Does The Endocannabinoid System Do?

The ECS is involved in regulating how your body perceives pain. This is why cannabinoids that affect the endocannabinoid system can completely change our body’s pain response—making them particularly useful for people with chronic pain conditions.

The human endocannabinoid system helps to maintain homeostasis in appetite levels. In essence, this means keeping you neither too hungry nor too satiated throughout the day. Various phytocannabinoids can help to adjust this function of the ECS, creating greater feelings of hunger or satiation.

Your endocannabinoid system maintains your stress response normal—that is to say, low when there is no danger, and high in case of any danger. This function of the ECS is what makes cannabinoid-based formulas so effective when it comes to treating anxiety disorders.

Research shows that the endocannabinoid system plays a major role in how energetic we feel on a day to day basis. By maintaining homeostasis in the body, the ECS ensures that we have the energy we need to get through the day, but not so much that we become shaky or overly excited.

Nausea and vomiting are perfectly natural body functions that keep us safe from poisoning and other dangers. But because they are also very uncomfortable symptoms, it’s important that the ECS keeps them in check. A well-balanced endocannabinoid system ensures that you won’t experience nausea when it isn’t warranted.

The molecules which have the greatest effect on the endocannabinoid system are called cannabinoids. But contrary to popular belief, not all cannabinoids come from the cannabis plant.

Endocannabinoids are molecules which are naturally produced by our bodies. We hear about them more rarely because they can’t be synthesized—only your body can produce them. In a healthy body, endocannabinoids help keep the endocannabinoid system working smoothly. However, phytocannabinoids can provide a very welcome additional boost.

The most well-known phytocannabinoids are CBD and THC. However, there are dozens of others, including CBG, CBN, CBDA, or THCV.

Each phytocannabinoid has unique properties and affects the endocannabinoid system in different ways. For example, THC affects your ECS in a way that increases appetite, while THCV actually reduces appetite.

The beauty of phytocannabinoids is that getting the right ones into your system can help you achieve the effects you’re looking for: less stress, less pain, relaxed muscles, or improved mood. 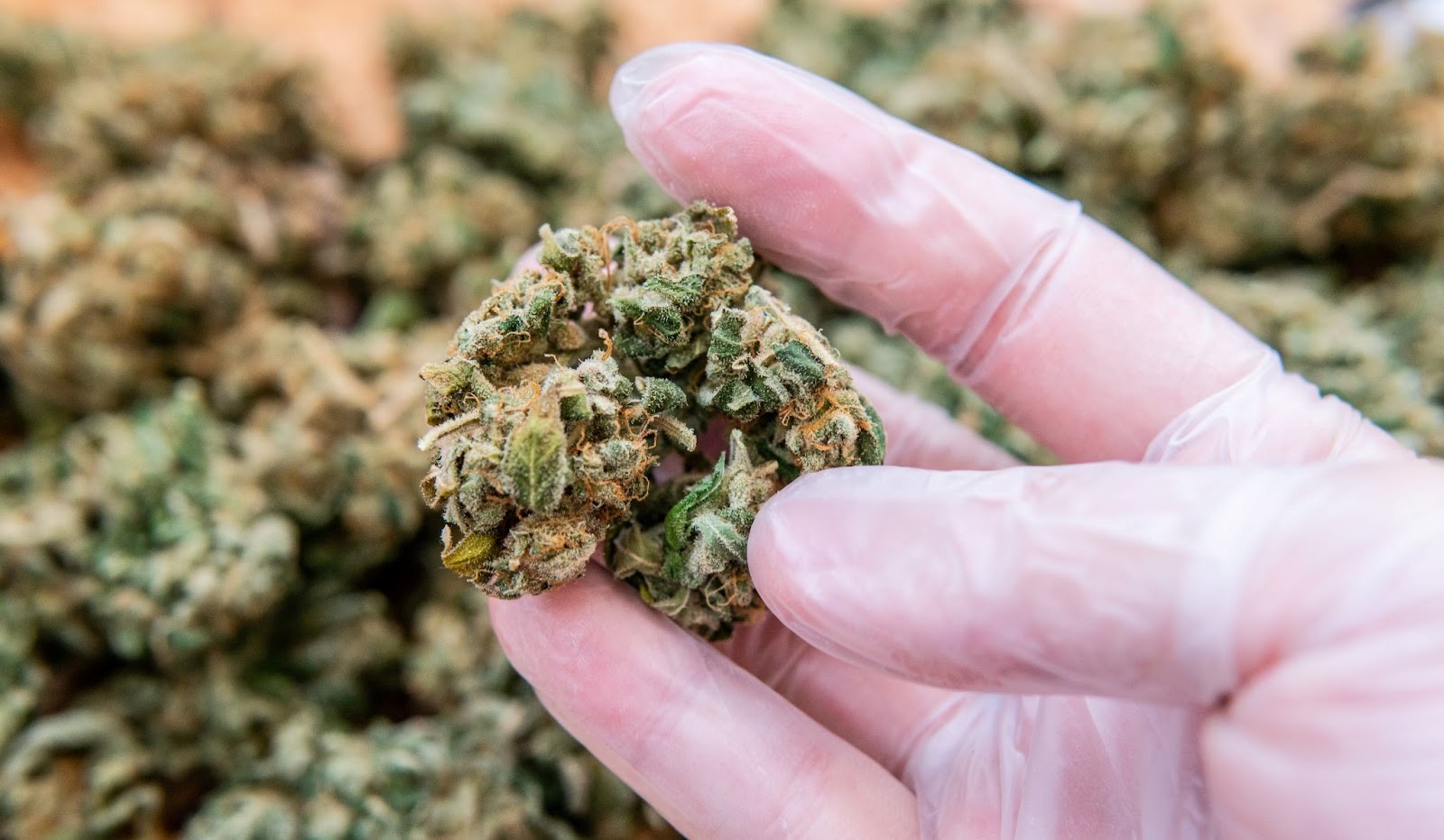 The Key To Balancing The Human Endocannabinoid System

Your endocannabinoid system can work perfectly fine without any outside help from the cannabis plant. However, cannabinoids can provide a boost to the ECS which helps everything run just a little smoother.

By choosing the right cannabinoids for your needs, you can help your ECS to help itself—whether you want to fall asleep easier, experience less pain, or just feel more relaxed in your everyday. We’re lucky to be living in a golden age of cannabinoids research, in which more and more targeted products are available.

That’s not to say that only phytocannabinoids can help and boost your ECS (although it’s one of the easiest ways!). Your body will also naturally produce more endocannabinoids to balance out the ECS when you’re eating well (anti-oxidant-rich foods really help), staying hydrated, getting plenty of sleep, and exercising regularly. Moreover, research has shown that relaxation-inducing activities such as yoga and meditation also help to improve the overall state of the endocannabinoid system.

The endocannabinoid system is an important and complex network that scientists only recently began investigating. Today, we know that keeping your ECS happy is one of the best things you can do for your overall health and wellness.

Renact’s proprietary formulas are a blend of carefully curated cannabinoids that target specific issues: falling asleep (REST formula) and anxiety (RELIEF formula). Give your ECS the boost it deserves by trying out our vaping formulas—order your first starter kit today!